The Woman in Rags – Krakow, Poland in Winter

It was midnight when our train pulled into Krakow, Poland. The cold glass windows offered an empty view of the train yard of Poland in winter. I swung my pack over my shoulders and tightened my hip belt as I stepped down onto the platform. My breath was visible and my beanie pulled down over my ears. The girl I was traveling with was just steps behind me. 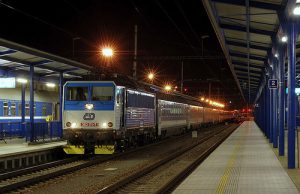 Poland in Winter – The Way to the Hostel

I fished around in my pockets for the remnant of a flyer from a city or two before, the one I had jotted down a Polish address and hostel name on. Near the entrance/exit gate was a small booth. It was barely big enough for the employee sitting inside of it.  I walked up to show him the address and ask which direction we should head. But before I could utter the few Polish phrases I had learned, he shooed me away, muttering under his breath.

I thought I heard the words, “Not my job” as I shuffled away from him, out of the gate and into the square. 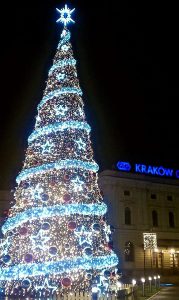 A massive Christmas tree stood erected in front of the train station. As we stopped to admire it, snow began to fall. “The first snow of the year,” a lone man on a nearby park bench commented.

Krakow – a place from a medieval storybook

We began making our way across the empty square, and took a slight turn down a side street in the direction we believed our hostel was. Krakow seemed a place straight out of a medieval storybook in Poland in winter, with it’s walls and watchtowers, old narrow cobblestone roads, and dimly lit street lamps. Full of knights and dragons and castles. It was a bit eerie, the feeling we had as we sought out our hostel somewhere among the ancient winding buildings of old.

As we walked through long patches of darkness between sparse street lamps in Krakow, the shape of a person became visible up ahead.

It was coming closer.

It was coming straight for us.

The Woman in Rags

The shape was moving with intent, although obviously having a hard time walking a straight and continuous line. As it came closer I could see that it was a woman; she was haggard and dressed in a mix of what looked to be rags underneath an unzipped overstuffed coat, suited for Poland in winter. She leaned into the wall as she made her way down the cobblestone street. She’d try to stand up straight, only to stumble over her own feet and fall back into the nearest building again.

She appeared to be drunk as she neared us, only a few yards away now.

I could hear her tired inhale, the sound of a worn out wheeze.

I could see that her hair was thin and stringy as she approached us. Her teeth were mostly missing, her eyes were sunken, and her skin was pale and translucent. Her cheekbones protruded from her thin skeletal face. She wasn’t drunk, she was strung out.

Beneath the long shadows cast by the street lamps she looked nothing short of ghostly. She could have easily been a character from a child’s nightmare.

She stumbled into us with a weight I wasn’t expecting, and in an almost panic-like state she half whispered, half gasped,

Nearly out of breath she exclaimed again, “Help! Zlut eat my dok!”

Her appearance, tone of voice, and staggering demeanor were all cause for alarm. I glanced sideways at my friend, whose face portrayed the terrified confusion I was feeling.

The situation was surreal. The medieval backdrop, the solitary streetlamp and it’s long shadows cast on the cobblestone street. The legend of the dragon that once ravaged this town. The cold Krakow air that burned at my lungs and the foreign dampness of this early morning hour.

This frightful woman, her harsh accent and butchered words. It was all feeling very Lord of The Rings-ish, a perfect place for The Dark Riders to be hiding out. I had to shake the chill from my spine.

“A slut ate your dog?!” I couldn’t believe what I was hearing.  I looked around, half expecting to see a hooded individual crouched over a fire, roasting this woman’s poor dog on a rotisserie in Poland in winter.

“Yes! My dok! Zlut. Zlut eat my dok!” she kept repeating, frantically grabbing at my arms, her fingers were bone and skin and dug into me with an anxious urgency.

My friend’s eyes grew large, “A slut ate her dog! Is that what she’s saying? That’s terrible! What kind of woman eats another woman’s dog!?” We were both beside ourselves, speaking too quickly in English for the poor woman to understand.

Amidst all of the commotion we had forgotten what we had learned on the train ride just a few hours before. All of the Polish phrases that we had practiced, learning if tipping at restaurants is customary, and if you can use a public restroom without making a purchase.

But specifically, and more importantly, we had forgotten the currency. The Zloty, commonly shortened to Zlot. Which can sound a whole lot like Slut to an American who thinks someone’s dog has been eaten during a snowy night in Krakow, Poland.

After one of the most confusing 5 or 6 minute conversations I’ve ever had in my life, we both realized she wasn’t saying, “A slut ate my dog” but instead, she was asking for Zlot to feed her dog. A ploy, I’m almost certain.

Relieved that no dogs had been eaten this night, I put my palms up and shook my head, “No … I’m sorry…. I have nothing.” I hadn’t even been to an ATM yet, and I didn’t have any Zloty to give her even if I had wanted to. She grabbed ahold of my jacket, the weight of my pack throwing me a bit off balance. Prying her fingers off of my forearm and stepping backwards, I repeated that I had nothing, “No Zloty, I’m sorry” I said as I made a lateral move away from her and the wall. 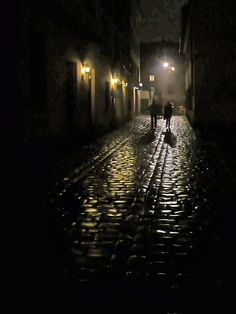 Almost unfazed she continued groping the wall as she made her way down the street, mumbling something in Polish the whole way, until she disappeared into the dark just as she came.

A Feeling of Compassion

A little while later as I lay in my hostel bed thinking of that woman in rags, feeling the place on my arms that she grabbed onto so tightly, and felt an odd sense of compassion. Imagining what paths she had taken in life that led her to stumble on us in Poland in winter. The things those sunken eyes had seen, the stories that toothless mouth could tell. The sad truth that she seemed to be forgotten by everyone who had once been a part of her life. What had brought her to that very moment, when she held onto me as if she were hanging from a cliff and I was her last shred of hope?

I fell asleep with the unsettling feeling that she was out there, cold, alone, lost inside her own mind. Surely I would see her on another cobblestone street, falling against another wall, telling some other foolish innocent that a slut had eaten her dog. But then I would be prepared. I would have a few extra Zloty in my pocket for her. Perhaps I could buy her lunch or some warmer clothes, get to know this individual that had left such a frightening impression on me.

I spent five days in Krakow.

I never saw her again.

To the woman in rags, I won’t forget you.

*** I arrived in Krakow after a long, very very stoned day from Amsterdam. It was an absolute nightmare.

Courtney is a humanitarian at heart! A foodie, adventure junkie, and amateur photographer. She’s passionate about showing others how travel can be both inexpensive and fulfilling. For some cheap travel tips check out her website and Instagram!

Courtney is a humanitarian at heart! A foodie, adventure junkie, and amateur photographer. She's passionate about showing others how travel can be both inexpensive and fulfilling. For some cheap travel tips check out her website and Instagram!

This site uses Akismet to reduce spam. Learn how your comment data is processed.

Join our inclusive community
of nearly 100,000 women who
share your passion for travel in our
Her Adventures Facebook group!

Put North Dakota On Your List Of States to Visit

Goa Attractions: The Best Places in Goa and the Carnival